The mean follow-up was months median, 54; interquartile range, 33 Most Pediateia were small Results The annual hemorrhage rate for any undiagnosed AVM was 1.

Older patients, cortical or subcortical AVMs, and cases with multiple draining veins were less likely to present with bleeding. During the first 36 months postradiosurgery, hemorrhagic AVMs had a rebleeding rate of 2. Nonhemorrhagic AVMs had a hemorrhage rate of 1. Arterial hypertension and nidus volume were independent predictors of bleeding after treatment.

Mean nidus obliteration time was months median, 32; interquartile range, 25 40with hemorrhage rate of 1. Conclusions Both hemorrhagic and nonhemorrhagic AVMs benefit from radiosurgical therapy, with gradual decrease in their bleeding rates over the years.

Albeit small, the risk of hemorrhage persists during the entirety of follow-up, being higher for cases with hemorrhagic presentation and nonobliterated AVM. Its delayed efficacy and potential long-term side effects make the unbiased evaluation of its validity in preventing cerebral hemorrhages difficult. This is especially true in regards to radiosurgical treatment of nonruptured AVM, where controversy exists concerning different management alternatives.

Although many centers use the same approach with unruptured AVMs as with hemorrhagic cases surgery, RS, or embolization to diminish their lifelong risk of first bleeding, others advocate for pediatrai aggressive behavior, to pediwtria point of no treatment. Patients and Methods Pediatia This study comprises a series of consecutive patients with brain AVM followed at our site since Though the referral criteria for RS varied on an individual basis, general indications were small AVMs located in deep or eloquent areas of the brain sensorimotor, language, visual, kalformaciones, hypothalamus, internal capsule, brain stem, cerebellar peduncles, and deep cerebellar nuclei that made them unsuitable for surgery.

In many cases, embolizations were performed before the RS to decrease nidus diameter. Briefly, catheterization was performed under general anesthesia with transfemoral approach by using standard coaxial techniques.

Guiding catheter was located in carotid or vertebral artery, and a microcatheter was navigated to the nidus of the AVM. Once the tip was in the desired position, injection of embolization material was carried out. AfterOnix with Marathon ev3UltraFlow ev3or Sonic Balt catheter was used according to standard embolization technique. Very occasionally, patients underwent RS after a surgical procedure.

Demographic data and arteriovenoas of cardiovascular risk factors were documented. Stroke malfogmaciones available at DOI: Current smoking habits were also noted. Nidus characteristics size, location, drainage, presence of aneurisms as seen on diagnostic digital angiography and brain magnetic resonance MR were all recorded according to published standards. Hemorrhagic AVM were defined as having radiological signs of acute bleeding on computed tomography CT scan or MR together with compatible clinical symptoms.

Nonhemorrhagic AVMs had no such signs, and were subsequently subclassified as having presented with epileptic seizures, headaches, focal cerebrwles, or none of the above.

This study was approved by cerebales hospital ethics committee.

Radiosurgery Technique Stereotactic RS was performed in a single session with the use of Gamma knife. A Leksell stereotaxic frame was affixed to the patient s head Elekta AB. Virtual simulation and planification were performed based on MR and digital arteriography.

Follow-Up Patients were followed biannually from the moment of diagnosis up until 1 year postradiosurgery, and annually afterward.

Serialized contrast enhanced MR studies were performed annually, and also if the patient complained of new or worsening symptoms. 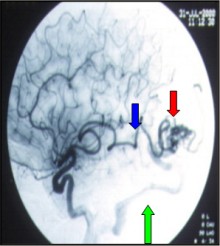 Digital arteriography was scheduled 3 years after RS, unless a previous MR clearly showed the persistence of anomalous vessels or a patient refused the procedure. Nidus obliteration was defined based on angiographic criteria: At any time during the follow-up, newly acquired symptoms warranted an urgent CT and a scheduled MR.

Hemorrhage was defined as any clinically relevant event with fresh blood in the vicinity of the malformation confirmed through CT or MR. Statistical Analysis Hemorrhage rates were calculated as the number of events during a predefined period divided by the artediovenosas of the duration of individual observation periods.

We performed the calculations for birth-todiagnosis, diagnosis-to-rs, and postradiosurgery time periods. To calculate birth-to-diagnosis bleeding rates, we assumed that patients were at risk for hemorrhage from the moment of their births. Last, for the postradiosurgery analysis, we calculated the hemorrhagic rates during and after a predefined period of 3 years to correct for the delayed effect of treatment.

Three years is a widely accepted postradiosurgery waiting period in many centers, including ours, after which other treatment options are often explored. For analysis of the effect of nidus obliteration on the bleeding risk, we encountered the same problem as all studies on RS of AVMs do. The exact moment of nidus closure is unknown. Other authors have attempted to infer the moment of nidus closure from serialized MRs defining it as the midpoint between the dates of the last images showing a patent nidus and the first images suggesting AVM closure.

The problem with this approach is that MR angiography has lower spatial and temporal lediatria than does digital angiography, and can easily miss residual slow, small-flow shunts.

Conversely, perinidal contrast uptake may not represent patent residual vessels, but rather a localized brain-blood barrier disruption caused by RS. We felt that this approach was both more precise and more similar to clinical kalformaciones where digital angiography is always necessary to confirm definitively the closureeven if it could result in longer observation periods and, therefore, lower hemorrhagic rates during the latency period.

Univariate tests 2, t test and multivariate logistic regression analysis were used to describe the association of demographic and clinical variables and nidus characteristics with the initial hemorrhagic presentation of the AVM. Kaplan-Meier survival curves, together with log-rank tests, were used to represent the evolution of hemorrhagic and nonhemorrhagic cohorts in time.

Patients were censored at first postradiosurgical hemorrhage, if they underwent another treatment microsurgery or second radiosurgerywere lost to follow-up, or died.

Data are reported as mean SD, median, and interquartile range. Results General Patient Characteristics A total of cases were included in the study.

There were 12 children younger than age 18 years. Patient demographics and medical history, radiological characteristics of AVM location, size, Spetzler-Martin scale, aneurisms, and drainageas well as details of other treatments undergone before RS are presented in Table 1. The same table also lists the presentation symptoms of nonhemorrhagic AVMs. 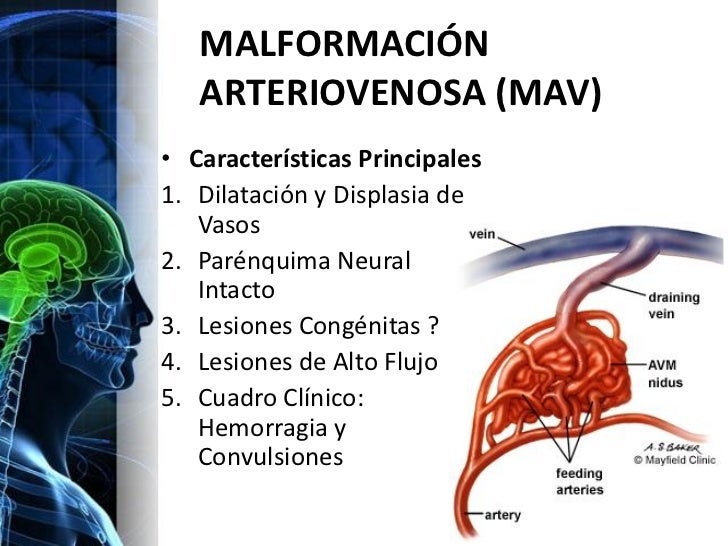 Age, location of the nidus, single draining vein, and exclusively deep drainage were associated with hemorrhagic presentation on univariate analysis. Older patients and cortically or subcortically located AVM were less likely to have presented with bleeding. On multivariate analysis, the first 3 factors retained their influence on the likelihood of initial hemorrhagic presentation Table 2.

Three interventions happened more than 10 years before RS 2 were presumably successful, but persistence of nidus was discovered during follow-up, and 1 failed to remove the AVM. One patient underwent evacuation of a brain hematoma. Seven additional bleedings were registered. Four of them were rebleedings.

Four patients died, 2 of them from cerebral hemorrhage. The cohort of patients with hemorrhagic AVM had an annual rebleeding rate of 2. After the initial 3 years, the rate was reduced to 1. Patients with nonhemorrhagic presentation had an annual hemorrhage rate of 1. Kaplan-Meier curves are presented in Figure 2B log-rank, 0. The overall evolution of the bleeding rates is summarized in Table 3. Influence of AVM Closure on the Hemorrhage Rate There were 3 hemorrhagic events among the 52 patients with angiographic evidence of nidus obliteration.

Mean time between radiosurgery and confirmation of closure was months median, 32; interquartile range, 25 Before the obliteration was confirmed, the annual hemorrhage rate was 1. After the obliteration of the nidus, the rate decreased to 0. As for AVMs that did not have conclusive evidence of nidus closure at the end of follow-up, their annual hemorrhage rate was 1. Factors Influencing Postradiosurgical Hemorrhage Smoking and arterial hypertension were independent risk factors in univariate analysis, increasing the postradiosurgical bleeding risk more than 2-fold and 4-fold, respectively.

Diameter of less than 3 cm, smaller AVM volume, Spetzler-Martin scale of 1 or 2, and absence of aneurisms were protective factors. When entered in a multivariate model, only hypertension, diameter, and aneurisms retained their significance Table 4. Does 1 Therapy Benefit All?